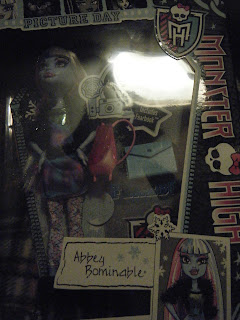 I spent the last few days going to the after Thanksgiving sales and amid shopping for gifts I found a few new dolls to add to my collection. I had heard about the Monster High Picture Day dolls on Monday and didn't expect to see any in the stores because around here we get the new stuff a little later than most places. I happened  across Abbey in WalMart and had to buy her since she is one of my favorite characters in the lineup.
Abbey is ice blue and VERY sparkly, more so than Skull Shores Abbey. She has dark pink lips and blue, purple, and pink eyeshadow over her pink and purple eyes. Her hair is layered with pink, blue, and purple streaks, it also has the glittery tinsel like strands. She is wearing a blue, purple ,and pink dress that almost looks like it is tie dyed. It has a green metallic piece at the top masdse to look like melting ice. She has on a black sparkly "fur" shrug, and a black belt made to look like ice. She is wearing white leggings with black, blue, pink and purple triangles on them made to look like ice crystals. Her outfit is finished of with black "ice" boots with the tops made of "ice crystals" to look like fur, and a pink icicle earring. Her hands seem larger in this version, I'm not a hundred percent certain but to me they look a lot bigger. She has a dark pink backpack with a keyring containing three black keys on it. She also has a blue ice print portfolio and a copy of the Fearbook. The Fearbook has Abbey's picks for most likely to succeed, most likely late for class and fastest. It conatins stickers of all the students and a place for you to put the pictures for your picks for fastest, most likely to succeed, and always late for class. It also has a group photo in the back of the student bodies, it is the same picture that was on the bag given away at SDCC, and a signature page with the students signatures.
The bottom right hand corner of the box has Abbey's fearbook picture on it. the back of the box has Abbey's biographical information that was on her original release box. It also shows the other student bodies in their fearbook photos. Draculaura's face and body is blacked out since she is a vampire. BFF is written accross Draculaura's and Clawdeen's photos. Toralei's photo has ice on it and she is wearing her fashion pack outfit. Clawd's, Ghoulia's, Clawdeen's and Deuce's photos are their original official art, and Abbey's, Cleo's, Spectra's and Draculaura's are from this line.

I look forward to seeing the Cleo doll since in the picture she has long hair and the recent releases have had short hair, and Hissette is in the photo so I'm hoping he will be included. 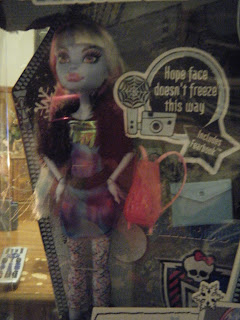 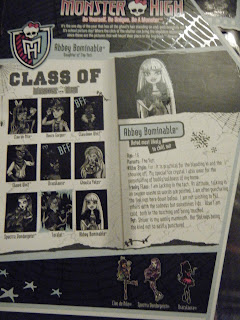 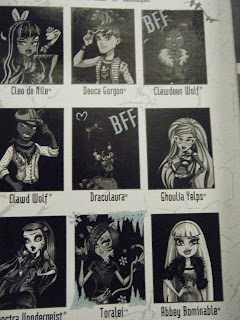