Today we are flashing back in time to feature Holly Hobbie. The original character,  a patchwork dress wearing girl with a bonnet, was drawn by a woman with the name Holly Hobbie, and that became the character's name. In 1974 the character was turned into a line of rag dolls, and was very popular for several years. The line was relaunched in 2006 as Holly Hobbie and Friends and is now a plastic/ vinyl doll instead of a rag doll.

This is a six inch Holly Hobbie rag doll from the 1970s. She has a plush cloth body and is wearing her blue patchwork dress with white flower printed sleeves and trim. She has her trademark blue bonnet with tiny yellow flowers printed all over it, and her leggings under her dress have the same print as her bonnet. She has light brown yarn hair styled in two pig tail braids. Her face is very sweet, she has brown eyes, a thin smile, a small line for a nose, and a slight blush on her cheeks. Her dress does come off, it buttons at top in the back and ties in a bow in the middle, her bonnet and leggings are sewn to her body. She is very sweet and I think the older version has more charm than the newer versions. 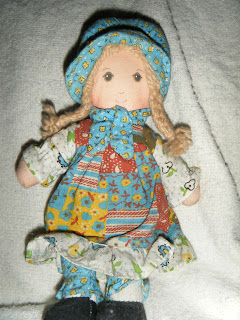 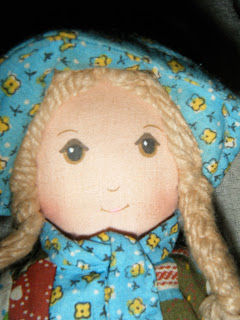