Last weekend on an impromptu shopping trip I came across the Monster High Color Me Creepy Sea Monster set. I love the Create A Monsters so I bought the set. The CMC sets come with the already assembled doll, an outfit, a wig, shoes, a red friction stylus, a blue ice stylus, and some arm and leg decorations.
I half unboxed the doll to get to the instructions and the first thing I noticed was that the color change feature is temperature based (reminds me of a Barbie I had as a kid). This feature bothers me a bit because the instructions     state that you fill the insert that's in the blue stylus with water and put it in the freezer for a few hours. Who wants to open a toy and find out they have to wait a few hours to play with it? Not me and definitely not any child I know. This also means that once the area of the doll warms up again the drawings fade, usually in a few minutes. I can see where this provides an unlimited drawing area, but I can see this frustrating some kids who have to keep going back over what they drew to make it visible again. You can also dip the arms and legs in cold water and draw on them with the friction stylus, but this way doesn't work as well, at least not for me.
On the plus side if you take the ice stylus over the top of the torso (the only part of the torso that can be drawn on) there is a neat design hidden. Also the cute ears or antenna, which ever they may be (there are molded ears on the head) attach into holes on the wig to better keep them in place. I like that this set has add on packs that contain extra wigs, clothes and fins, which are great and can be used to accessorize some of the other dolls but overall I prefer the Create A Monsters. 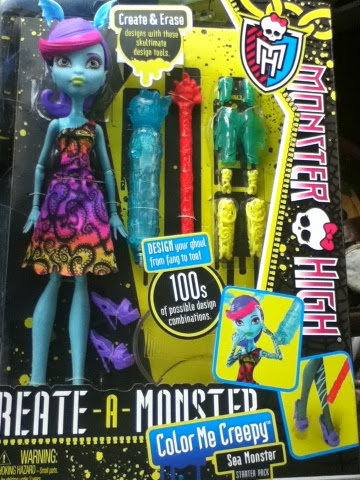 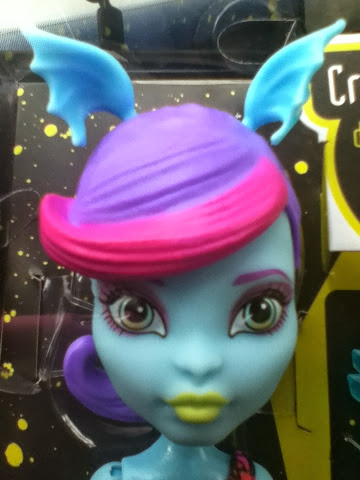 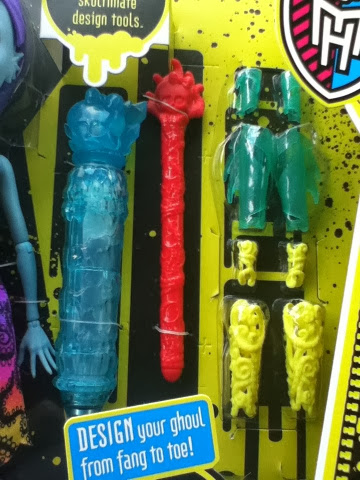 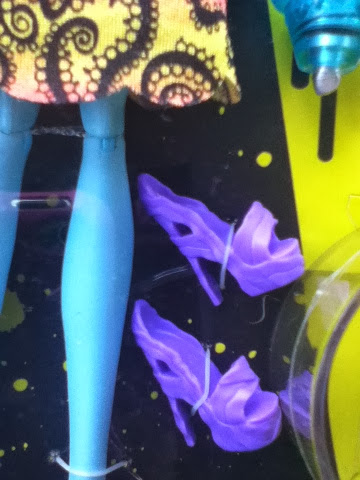 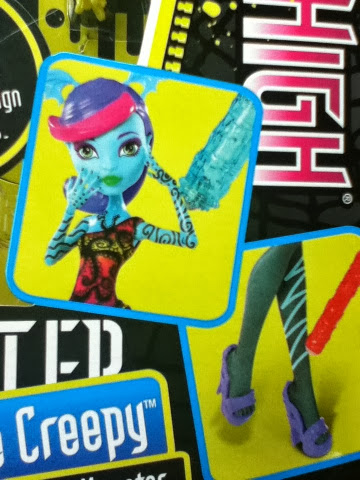 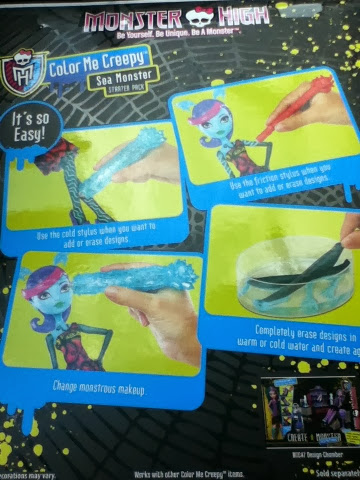 It has been quite a busy summer here in The Doll Room. Many members have joined the doll family here, and one of them has been on a few adventures.
Hearts for Hearts girl Dell joined the family here earlier in the summer and proved to be quite the travel companion. (Hearts for Hearts girls are 14 inches tall and completely vinyl). You will be seeing some of her excursions over the next several weeks and it will be followed by a special giveaway.
Now to Dell:

Whew its nice to be out of that store and out of that box. I'm so excited to be going on adventures with my new family and finally getting to stretch my legs. My new family likes to hike and we are going to hike near some waterfalls in West Virginia.  I cant wait to see a waterfall, I hope they are as pretty as they look on the brochure. 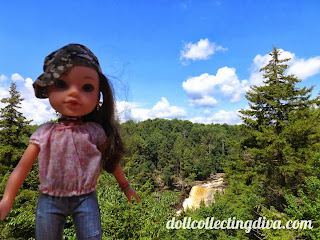 Wow there are a lot of waterfalls here, and lots of nice trails to hike too. I'm having so much fun, its too bad its starting to rain. Oh poo, the rain ended the trip early, but that's ok, I know we will be going on more adventures soon.
Until next time,
Dell

I was out shopping over the weekend and saw something I had not noticed before. In two different stores I saw dolls that looked like Monster High dolls but weren't. I didn't get a picture of the first dolls,but they came in two packs and were brightly colored. At the second store I saw another version of dolls by a different manufacturer. These Gothic Girls closely resemble Monster High dolls. The one in the box reminds me of Draculaura and the one on the box art looks a lot like Frankie. They are priced just a bit cheaper than a budget line Monster High doll, but it looks like the clothes should be interchangeable. 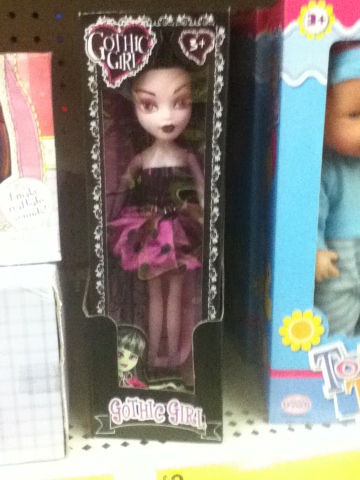 Update: November 19, 2013
Jane is now available on toysrus.com
http://m.toysrus.com/skava/static/product.html?type=TRU_product_us&url=%2Fproduct%2Findex.jsp%3FproductId%3D28350416&domain=http%3A%2F%2Fwww.toysrus.com
Her profile and diary have already been added to the Monster High Wikia.
The upcoming Monster High doll Jane Boolittle, daughter of Dr. Boolittle, made her official debut on Facebook earlier this week. It has been rumored that she may possibly be the Friday the 13th doll for December. It is only a rumor but we do know for sure that she will be available toward the end of the year or the beginning of 2014.
You can see her pictures here:
http://mhinsider.tumblr.com/post/55853836890/jane-boolittle-official-reveal-photos-from
Posted by Starr at 3:01:00 PM 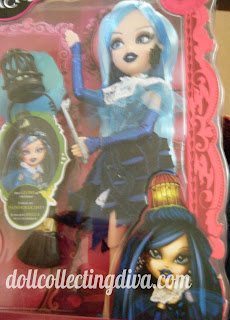 The new releases from the Bratzillaz line are called "Witchy Princesses." there are three dolls in the line and I purchased Carolina. I was drawn to her outfit and he beautiful side glancing eyes. Like the other Bratzilla dolls she comes with a brush shaped like a broom. Carolina has light blue hair with medium blue streaks and part of it is pulled in to a twist. She has side glancing with eyes with blue highlights. she has pale brown eye shadow with dark brown highlights and a silver eye shadow up to her eyebrows. Under her right eye she has a tattoo design and it also extends off of her eyebrow. She has black dangle earrings that look like connected feathers, and her lips are painted dark blue. She is wearing a collar of white lace and blue mesh that velcros at the front. Her dress has spaghetti straps and is black with a blue and teal design. The bottom of the dress has a small piece of white lace on the front and an over skirt at the waist. The over skirt  has a layer of blue tulle under a blue felt material with a black felt overlay. The black overlay is attach to the blue felt and has cut outs in it. The edges are cut very jagged and it looks nice except that the ends are already coming off.  Carolina is wearing dark turquoise heels with a molded bead designed band. She wearing long, blue, metallic  gloves that can easily be slide off her arms and she is holding what looks to me like silver colored opera glasses. I think those are suppose to help her see the answers from the past. She has articulated knees, her lower legs are the bendy rubber type while her upper legs are harder plastic. She comes with a black plastic headband that has a black bird cage attached to it. Inside the cage is a little bird sitting on a perch, and the bird glows in the dark. 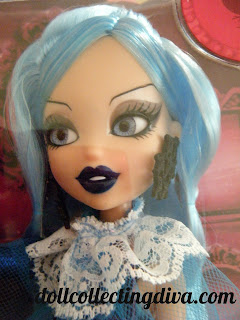 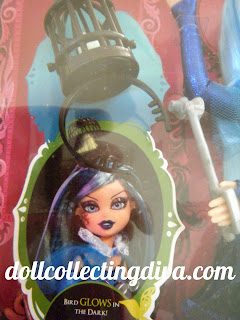 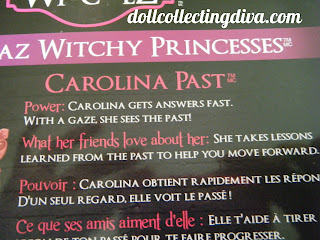 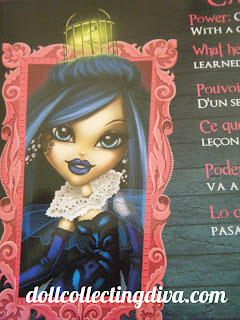 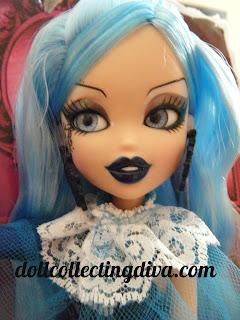 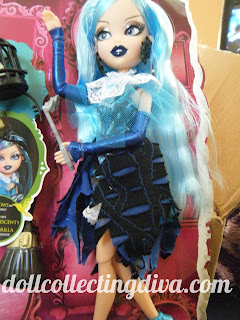 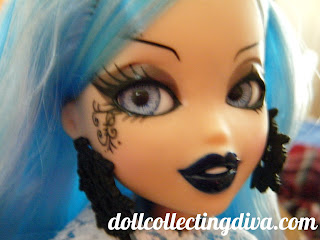 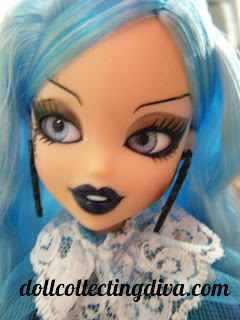 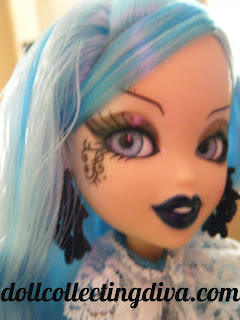 This is my first Bratzilla and I love her side glancing insert eyes and her hair. I don't care for the headband with the bird cage, but overall she is a beautiful doll.

Isabelle's last name is Palmer and her big unveiling will be tomorrow December 31, on Good Morning America.
DollyDormDiaries has a few great photo stories and comparison photos between McKenna, Lanie and Isabelle. Isabelle's eyes seem to be the same color as Lanie's and her hair is a bit darker.
http://dollydormdiaries.blogspot.com/?m=1
Isabelle has a pet kitten named Tutu, which is a change, since the last three GotY have had pet dogs.
Update December 26, 2013
American Girl has added hints, clues and games based on the upcoming girl of the year. I think its great that they are drawing focus to her fashion designing and not just her dancing, and the game demonstrates that. Head to the website and check it out.


Update December 24, 2013
agoverseasfan has posted on her YouTube channel a preview of the new AG catalog that has Isabelle and her collection in it. I have to admit I really like the mix and match pieces and her accessories. The Studio Set is great, pricey but very nice with lots of pieces. If you haven't noticed yet there is a price increase again for 2014.
dolldiaries.com has also posted some pics of Mini Isabelle from someone who had preordered her. I think she's cute with the dark pink hair underneath but her shirt looks huge and very unflattering.

Update October 31, 2013
dolldiaries.com has posted photos from an eBay auction that had Isabelle for sale. She has blond hair, hazel eyes and the classic face mold. According to the listing she has a hair piece to make her hair look like it is ombre.

Update September 17, 2013
The GOTY 2014 will be made as a mini doll and is available for preorder on barnesandnoble.com.

The book descriptions for the 2014 Girl of the Year are now on Amazon. It looks like we can be certain that she will be a ballerina, and most likely has an interest in costume design. Unlike recent GOTYs she has a three book series instead of a two book series. We are now waiting on a name for the 2014 GOTY (it has been rumored her name will be Isabelle). The books were written by Laurence Yep who wrote the books for previous Girl of the Year Mia.