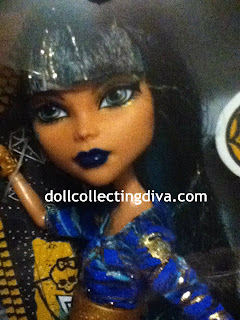 I went to Wal Mart very early Saturday morning to beat the holiday shopping crowd. Before I left I had to take a trip down the doll aisles, and while I was looking, I came across Monster High Picture Day Cleo de Nile. If you didn't know by now Cleo is one of my favorite characters so I of course had no choice but to take her home.

I'm happy that this Cleo has long black hair, which has turquoise under neath and the gold tinsel streaks in it. Her outfit consists of  a long blue top with turquoise, gold and black in it to make a bandage pattern. She has a wide gold belt at her waist with a black winged scarab on it. she is wearing black and gold striped leggings and blue wedge sandals with gold wedges with a leaf pattern. Cleo is wearing gold eye makeup, and her lips are painted a dark blue color that I'm not sure I like. She has a gold folder, a turquoise purse with a gold scarab on it and three gold bracelets and it looks like one has a black scarab on it.
She comes with her Fearbook that has her choices for brainiest, most talkative, nicest smile. and nicest eyes. It has a page dedicated to the faculty of Monster High but unfortunately Mr. Rotter isn't included. It has a sticker sheet with a picture of the student bodies so you can make your choices for the same categories that Cleo did. It also has a group picture and a signature page. The set also includes a black stand and black hair brush.
the box art has a picture of Cleo in the lower right corner with Cleo striking a pose for her photo and Hissette in the background giving her bunny ears. The back of the box has a mini biography that repeats what was on her original box, it also says voted most likely to leave a legacy. The class of Monster High is on the back and Cleo has drawn a big gold heart and many smaller hearts around Deuce's picture. She has also written BFF in the corner of Ghoulia's photo, and given Toralei horns, a beard and a mustache. 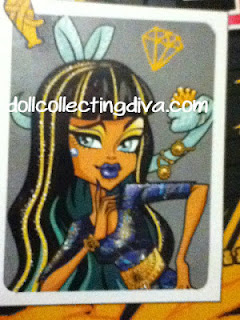 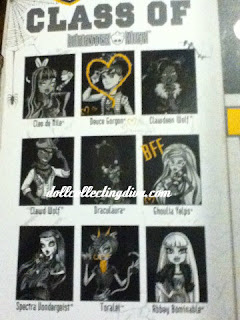 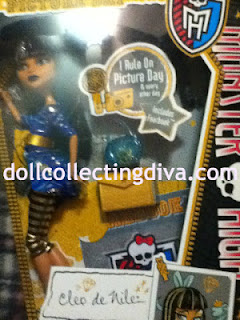 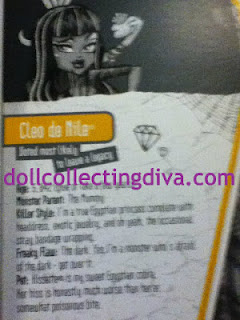 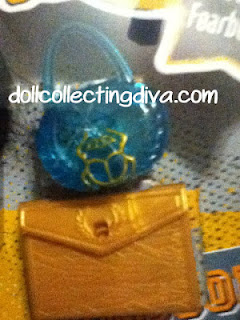 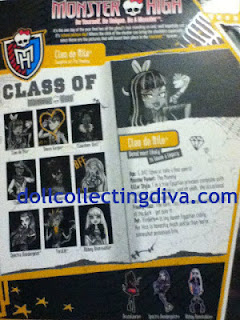 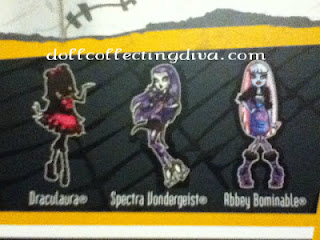